A Parent’s Guide To Diaper Rashes 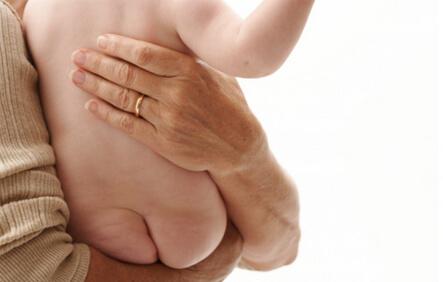 There are a surprising number of different types of diaper rashes (that respond best to different types of treatments). Skin wetness is the common denominator underlying these various causes of diaper rash. Wetness from urine increases skin friction, raises the skin pH, makes the skin less cohesive, and makes it more permeable. These effects combine to intensify the action of stool enzymes or other irritants that then inflame the skin.

In all of the following types diaper rashes, the outermost layer of skin – the stratum corneum — has been damaged. With this protective layer breached, it is easy for microorganisms such as yeast or bacteria to invade the inflamed skin. This makes the rash worse and less responsive to usual treatments. Yeast or bacteria can complicate any of these types of diaper rash:

Friction rash. This is the most common form of diaper rash, and affects almost all babies at some time. It is most common on areas where friction is most pronounced, such as the inner thighs, or under the elastic of diapers that are too tight. It comes and goes quickly, and responds well to frequent diaper changes, airing out, and protective barriers.

Irritant rash. This is most conspicuous on the exposed areas, such as the round part of the buttocks. It tends to spare skin folds and creases. It’s generally the result of contact with stool enzymes or irritants such as harsh soaps, baby wipes, detergents, or topical medicines.

Allergic rash. This may occur in combination with an irritant rash or by itself. It is also more common on exposed areas. The rash looks similar to a poison oak rash.

Intertrigo. Moist heat causes this common type of diaper rash that occurs deep in the skin folds. The involved skin looks thin, as if it has lost several layers.

Seborrhea rash. A salmon-colored, greasy rash with yellowish scales characterizes this diaper rash that is also worse in the skin folds.

Psoriasis. This stubborn rash doesn’t necessarily look distinctive. Other signs of psoriasis usually accompany the diaper rash, though, such as pitting of the nails or dark red areas with sharp borders and fine silvery scales on the trunk, face, or scalp.

A number of rare diseases such as congenital syphilis, histiocytosis X, zinc deficiency, Wiscott-Aldrich syndrome, acrodermatitis enteropathica, or Jacquet’s dermatitis all cause characteristic diaper rashes. These are extremely uncommon, but should be considered in prolonged, severe rashes that are unresponsive to the appropriate therapy.

Last medical review on: September 12, 2010
About the Author