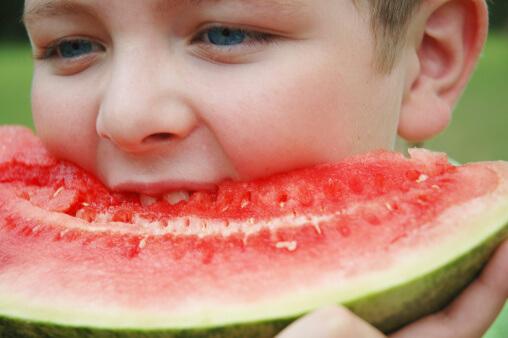 The rise of diabetes is alarming. Today almost 1/3 of Americans, more than 73 million adults, already have diabetes or pre-diabetes (higher than normal blood glucose levels), according to the June 2006 issue of Diabetes Care. Type 2 diabetes, which accounts for 95% of diabetes cases, is the one associated with overweight and obesity. When you have type 2 diabetes, your cells can no longer use insulin properly. You may also make less insulin than the body needs. Type 2 diabetes used to be just a disease of middle age, but increasingly we are seeing type 2 diabetes and pre-diabetes in children and teens. Adding healthy foods to the diet may slash the risk of diabetes, according to an exciting May 19, 2006 study in the American Journal of Epidemiology. Over 4000 teens and young adults in the United States were followed for 15 years to see if they developed diabetes. Previous studies have shown that eating more fruits and vegetables each day decreases the risk of diabetes, but this study didn’t rely on people’s reporting of what they ate: the investigators measured nutrients in the blood. Blood tests showed that the higher the level of carotenoids people had at the beginning of the study, the lower the chance of developing diabetes (as long as they did not smoke).

Carotenoids are a group of powerful antioxidants found in foods, especially in fruits and vegetables. Here you want to be at the top of the bell-curve of carotenoids: for each standard deviation increase in total carotenoids, the risk of diabetes dropped by 26%. Among the carotenoids, beta carotene was correlated with the biggest effect. To increase carotenoids in the diet, especially beta carotene, you could add uncooked spinach, or other green, leafy vegetables, raw or lightly steamed carrots, red bell peppers, broccoli, and/or tomatoes. I’m getting in the mood for a spinach salad! Asparagus is another great source. But for kids who are still learning to be salad fans, consider watermelon, papaya, and apricots. If getting fruits and veggies into kids is tough, consider buying organic. When tested head to head, they average about 30 percent higher in antioxidants than their conventional cousins – 3 servings of these would pack the punch of 4 of the alternative. Even catsup can be rich in carotenoids. And organic catsup has been found to have about double the antioxidant power of conventional catsup.