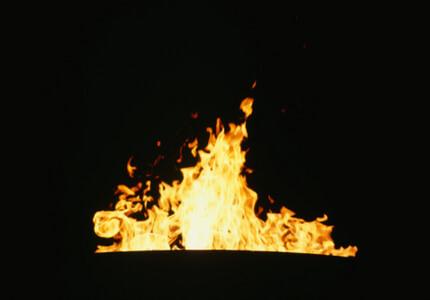 When I was first asked to carry the Olympic Torch, my eyes misted. Not until the moment actually came did I understand why.

The Olympic Flame reaches back to a time when the human race was younger, and the planet less crowded. It reaches back to a part of Greek culture that valued truth, beauty, and excellence above power and practicality. When the Olympic torch passed through a town, people set aside their work and even their wars to come together and stretch the limits of humanity’s best. They heard the call, and they came. In Ancient Greece, the Olympic games weren’t limited to sports. Virtuoso musicians, for example, also got Olympic medals for carrying music to new heights.

On Friday, May 3, 1996, I boarded the shuttle bus that would carry me to the spot where I would run my leg of the relay. While on the bus I was handed a new torch that would soon receive the Ancient Flame. Tears began to well up as I realized that I was part of a relay that is even bigger than the Olympics. I am part of the human race. Generation after generation we each grasp humanity’s torch, carry it for a brief while, then pass the flame to the next generation.

I stepped from the shuttle into the bright sunlight, and cheers erupted from the crowd. We all felt the magic of what was about to happen. I told the crowd the story of Lynda Johnson, the blind woman who, with her dog Dodd, was making her way toward us with the Olympic Flame. Lynda works with people who are losing their sight, to help lead them “beyond vision.” While Lynda approached, I passed the torch through the crowd, so that each could hold it for a moment. I spoke with my parents, who are in reality passing the torch to me. I spoke with my children, who have already begun to take the flame from me.

A few minutes later, the Olympic Flame came into view. Lynda and Dodd were surrounded by the escort motorcade used to honor this sacred symbol of peace. The motorcade stopped at my feet, and a man on a motorcycle called me into the street. I heard the call, and I came.

Lynda passed the flame to me. I lifted the torch high, waved to my new friends, and began to run. My older children spontaneously ran alongside me.

Carrying the flame, it really hit: We are all one family, one race.

As I ran, my mind was filled with images of this same flame being passed from person to person across our great country. I realized that in a few months this very flame that I was carrying would focus the attention of the world. From each continent people will hear the call, and again join together to stretch the limits of humanity’s best. For a few weeks many will remember that we are all one family, and then most of us will again forget. As I felt the weight of the torch in my hand, I hoped that perhaps, if we are reminded often enough, we will learn the beauty of the Olympics, and war will give way to a new era of peaceful cooperation.

My leg of the relay was over in the blink of an eye.

I passed the flame to Francisca de Castro, a leader in the Hispanic community. Off she ran, and the flame went with her. I hugged the wonderful family, friends, and strangers who were gathered at the end, and we felt together the significance of what we had enacted.

That evening, I was in downtown San Francisco, crowded into Justin Herman Plaza, as throngs awaited the Olympic Flame. For hours, I passed my torch through the crowd, so that many, many could share this experience. Even though the torch no longer held the flame, the magic lingered. This same torch was held by the homeless, and by a Hall of Fame pitcher, by children too young to know the Olympics, and by senior citizens, by those in wheelchairs and by Olympic gold medalists. Again, we all heard the call to join together and be our best. In a dramatic moment, Flame engulfed the Olympic Cauldron, and it was as if 50,000 of us were all one torch, and the Flame of Life was burning brightly.

Hours later, after the crowds had dispersed, I spoke with a group of police officers (and passed the torch among them). Many had been with the police force for years. They all agreed that this was the only large public event in their memory where there were no unpleasant incidents. My eyes misted again.

We heard the call, and we came — together.