Dr. Greene takes on the food pyramid to see how well it actually works. The results are shockingly bad. What's the alternative? 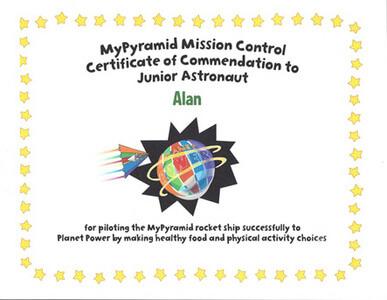 The Food Pyramid: Gone and NOT missed!

On June 1, 2011 I logged on to MyPyramid.gov for kids and played their Blast Off Game “An interactive computer game where kids can reach Planet Power by fueling their rocket with food and physical activity.” I registered as Alan, an 11-year-old boy. The results were slightly less horrifying than when I did this in 2006 (and reported my findings). But just barely.

When you launch the game, you’re invited to select food items and physical activity for the day from a list that varies occasionally if you play several times. When you’re satisfied with your choices, press the Blast Off button and the game will analyze your diet to see whether it would give your body the optimal fuel to complete your journey.

To start the day I chose chocolate sugar cereal. Because the nonfat milk it came with seemed rather bland, I added a cup of chocolate milk to go with it. At this point an alert popped up, but perhaps not the alert you’d expect after a junk food breakfast with a double dose of sugary chocolate:

I was still hungry, so I added a white bread English muffin to my white flour and sugar breakfast.

At school I selected a Sloppy Joe sandwich on a white bun and received a 3-star alert, but again it might not be what you’d expect:

“Well Done! You have enough Grains!” “Well done! You have enough Vegetables!” My lunch was missing something sweet, though, so I grabbed a glass of apple juice. Lo and behold, another alert: Being called a STAR PILOT is nice, so I went back and added some apple juice to my breakfast and chose apple juice for my afternoon snack, along with a glass of milk. I did receive an alert that whole or cut-up fruit is even better than fruit juice, the best advice I’d gotten so far. For physical activity I did some household chores. I set the table, I emptied the dishwasher, I made my bed, I put away some of my stuff. It seemed like it took an hour, but never got my heart pumping.

It’s been a long day! I chose fried chicken for dinner. This time I got TWO alerts. One suggested that more of my grain choices should be whole grains. I hadn’t expected fried chicken to prompt a grain alert, but I’m glad it did. This alert was one of two improvements I’ve seen in the 2011 version (the other is a much broader selection of healthy foods that a child could select. Kudos for that.). I also got another 3-star alert, this one expected given my Sloppy Joe and fried chicken:

“Well Done! You have enough Meats and Beans!” Still, something seemed like it was missing from my dinner – from my whole day, really. And I knew just what it was: gravy! So I added an order of gravy for my fried chicken. That sounded so tasty that I chose a second order of gravy as well. Ready for the Test

I was feeling stuffed, so it seemed like time to push the Blast Off button and have my diet analyzed. My food all tasted great, but I was a bit nervous about what they would suggest I change. How was my fuel? The big moment arrived. Mission Report Received! From Mission Control to Astronaut Alan:

“Based on your food choices the MyPyramid rocket ship landed on Planet Power. Everyone at Mission Control is very pleased with your fueling choices.”

My food choices* made them happy. And to top it all off, I won a certificate! MyPyramid Mission Control Certificate of Commendation to Junior Astronaut Alan for piloting the MyPyramid rocket ship successfully to Planet Power by making healthy food and physical activity choices.

And that is why…

And that is the story of how I came to hate the food pyramid and why I am celebrating its demise. Viva la Plate! Could this get any worse?

After my surprising first experience, I returned to FoodPyramid.gov for kids on June 2, 2011, determined to live a healthier lifestyle and to try to get my 11-year-old weight under control – despite the Food Pyramid Blast Off Game’s assurances that my previous sugar cereal with chocolate milk, double orders of fries, fried chicken with double orders of gravy, 0 whole grain, 0 real fruit, 0 real veggies diet was optimal.

Trying to Be Good

This time I chose whole grain oatmeal for breakfast with a banana and non-fat milk.

For lunch I had healthy vegetarian chili and a spinach salad, with fresh strawberries for dessert.

I completed a 10k race in the afternoon in my best time ever: 55 minutes.

I was hungry at dinner time! I chose grilled fish, whole grain brown rice, broccoli, and summer squash, with 2% milk to drink and watermelon cubes for dessert.

I was excited to push the Blast Off button and get feedback on my day. Imagine my disappointment when my rocket crashed!

My problem? The 10k race for 55 minutes didn’t count as much as an hour of setting the table, cleaning up my room and other household chores. I could fix that! I lied and said the race took 60 minutes.

I pushed the Blast Off button again. And failed! My rocket crashed again because my food fuel wasn’t good!

Luckily I Had a Parachute

Having crashed twice, I got the message. I went back to try again, and added a frosted cupcake to my dinner, even though I was already very full. And that did the trick! A frosted cupcake was all it took to fix my inadequate dinner of grilled fish, brown rice, broccoli, summer squash, and watermelon cubes. Who would have thought?

The Other Side of the Nightmare

So, I hate the Food Pyramid for kids for two reasons: it both congratulates bad food and fails to reward great food. As a teaching tool, it failed. Our kids’ nutrition (and waistline) got worse. But that’s what happens when the focus is on numbers first and not food quality first.

Nutritional Intelligence is one of the most important skills we can cultivate in our kids – the ability to recognize and enjoy healthy amounts of good food.

Measured by its ability to encourage Nutritional Intelligence, the pyramid flunked – but the Food Plate holds promise. Even if you disagree with the proportions they chose for the plate or side circle, it can be a powerful image for getting your plate the way you want it. I welcome the new Food Plate as a fresh way to look at our own plates and envision them filled with healthy portions of great food.