This study really makes me smile because the researchers found a connection between happiness and eating vegetables. 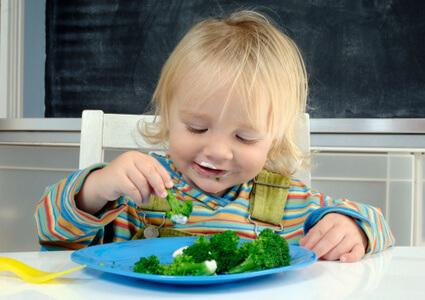 I’m always delighted when studies emerge finding unexpected benefits from eating healthy. As a pediatrician passionate about getting kids and families to adopt healthier eating habits, the more evidence I have as to to tempting reasons why, the better. This study really makes me smile because the researchers found a connection between happiness and eating vegetables. The study doesn’t prove which causes which – but just knowing these two are a pair is pretty cool.

A study released by Dartmouth University and British researchers found that people’s reported levels of happiness increases the more fruits and veggies they eat every day.

Admittedly, the increase wasn’t terribly large – those who consumed eight or more servings of vegetables daily rated themselves 0.27 points happier, on average, than those who reported no servings. But, I’d argue that any increase in happiness helps improve overall well-being, and with all the other benefits associated with eating produce, this could simply be icing on the carrot cake. (Or, should I say hummus on the carrot stick.)

Additional insights revealed from the study:

[I]n one survey, eating seven to eight portions of vegetables was more strongly associated with happiness and overall well-being than employment status. On the whole, the paper concluded that well-being peaks at seven daily servings of fruits and vegetables, but the surveys also showed that people who ate just five servings a day (the amount that the USDA recommends) were as happy—or very nearly so—as people who ate higher amounts.

The authors call their results “only suggestive” of a link between the fruit bowl and happiness levels, because even though they tried to control for income, work status, overall health, and other factors that play a role in how you feel about your life, there are a lot of other factors that can influence happiness. And, they add, it’s not clear whether vegetables make people happy or happy people eat more vegetables.

With these findings, I challenge you to introduce more fruits and vegetables into your family’s diet and let us know if you feel happier!

How many servings of produce does your family eat every day?