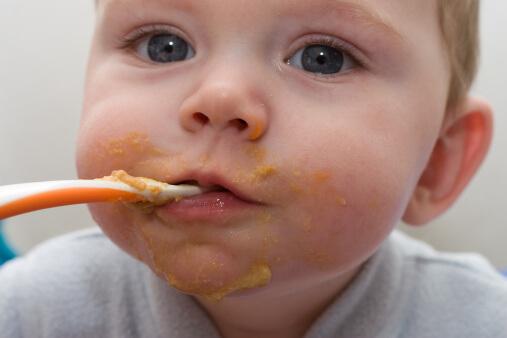 Foodie Tuesday
Parents are often told that it is not safe to feed their babies carrots cooked at home; only give them what comes in a jar. I disagree!

The worried warnings go something like this: “In some parts of the country, these vegetables contain large amounts of nitrates that can cause an unusual kind of anemia (low blood count) in young infants. Baby food companies are aware of this and screen the produce they buy for nitrates. . . . Since you cannot test for this chemical yourself, it’s safer to use commercially prepared form of these foods.”

This reminds me of the message behind the baby food and infant formula ads from when I was young: You can’t feed your baby as well as we can.

It’s time to put this myth to rest.

The kind of nitrate reaction of concern is a rare form of anemia called methemoglobinemia. There has only been one reported case of a baby with nitrate problems from home-prepared vegetable foods in the United States. Reported in 1973. It was a very young baby boy who drank too much contaminated carrot juice.

Commercial baby foods in the United States can also contain high levels of nitrates—and it’s not just in the roots and greens.

The real source of nitrates in babies:

Methemoglobinemia in babies is almost always caused by drinking infant formula, not by eating homemade baby food. This can happen when the formula is made with water (usually well water) contaminated by nitrates from synthetic fertilizer runoff. Breastfeeding is safe from nitrates, even if mothers drink this water.

Breastfeeding is protective beyond this. The beneficial bacteria in the guts of breastfed babies help protect against methemoglobinemia even if the baby is exposed to nitrates.

The core issue is the age of the baby.

The official AAP guidelines on nitrates say: “Home-prepared infant foods from vegetables (e.g., spinach, beets, green beans, squash, carrots) should be avoided until infants are 3 months or older.” (Emphasis mine).

I wish these guidelines were more widely repeated. Nitrates are mostly a risk to the lingering fetal blood cells that are gone by around three months of age. By six months, the stomach acidifies, and the risk plummets further. To avoid any nitrate problems in your baby, I suggest that you do the following:

1. Breastfeed. 2. Don’t mix formula with well water, unless it is known to have low nitrates. 3. Avoid feeding your baby homemade or commercial vegetables before 3 months. 4. Choose organic vegetables, which are grown without synthetic fertilizers. 5. Use or freeze opened or homemade baby food within 24 hours. Refrigerator storage can increase nitrates.