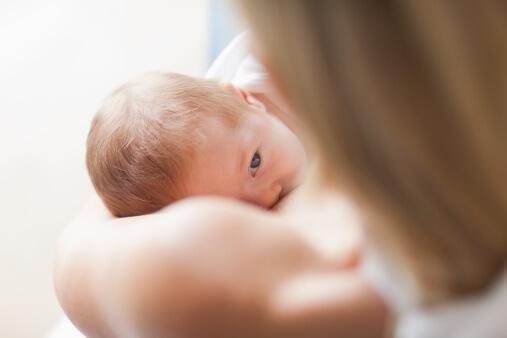 Before a baby is born, the normally pristine environment of the uterus is separated from the bacteria-rich environment of the vagina by a small mucus plug — like a cork in the cervical opening. Researchers have now found that this tiny plug is not just a mechanical barrier, but an active guardian. According to the results of a fascinating analysis published in the July 1, 2002 issue of the American Journal of Obstetrics and Gynecology, the plug contains bioactive proteins such as human lactoferrin and human lysozyme. An intact plug actively protects babies against Group B strep, E. coli, and yeast. Can this same type of protection help children after they are born?

Human lactoferrin and human lysozyme are both proteins that are important ingredients in breast milk. They are getting increasing attention because of their gentle but powerful roles in preventing infections. Formula-fed babies average as many as five times more ear infections in the first year than do breastfed babies. Breast milk also helps protect children from diarrhea, respiratory tract infections, meningitis, and other infectious diseases.

Lysozyme was the first antibacterial substance discovered by Alexander Fleming, who later went on to discover penicillin. Lactoferrin is a milk protein that improves the functioning of the immune system, and also has direct antibacterial and antiviral properties.

Lysozyme and lactoferrin are also present in tears.

Perhaps it would be more correct to refer to lysozymes and lactoferrins in the plural, because there are many different forms of these proteins that have different structures and different sources. Other mammals make lactoferrin and lysozyme to protect their own young (cow’s milk has very small amounts, for instance). Lysozymes (and lactoferrins) may be divided into human lysozyme (and lactoferrin) and that from other sources in the plant and animal world. Research suggests that human lactoferrin and human lysozyme are the most effective at protecting human babies, as one might guess. Also, human babies are far less likely to be allergic to human proteins, than to, say, cow’s milk proteins. Cow lactoferrin is readily available as a supplement.

Until now, there has been no practical way to give the human forms to children once they have been weaned from breast milk, no matter how much I might wish that we could wrap our children in a bubble of protection, or bottle every teardrop to help keep them safe.

Nevertheless, I would love for children to continue to get the gentle protection of lactoferrin and lysozyme throughout the first two years as their immune systems are developing. Breast milk is clearly the best source. Historically, children have nursed for most of these first two years, but that is less common today.

In a welcome breakthrough, scientists have now been able to produce both lactoferrin and lysozyme that have the same protein structures as the molecules found in humans. This could become a great gift to the weaned children of the world.

Dr. Greene is a practicing physician, author, national and international TEDx speaker, and global health advocate. He is a graduate of Princeton University and University of California San Francisco.
Get Dr. Greene's Pregnancy NewsletterSign up for Dr. Greene's FREE week-by-week newsletter, timed to your pregnancy to keep you up to date on every stage of your baby's development.
1 Comments
Shinichi on October 3, 2015

What comes to my mind is the skit by Girls Behaving Badly. They made a skip/gag on people with chesee samples. People were eating the chesee samples when they tell them it was made from human breast milk! Some started gagging. The types of chesee, they would say, were from various women, and they would show a picture, and why the chesee had whatever spices or a smokey flavor I personally thought it was hilarious.If it is studied to be safe, it should go on sale as long it is label properly.