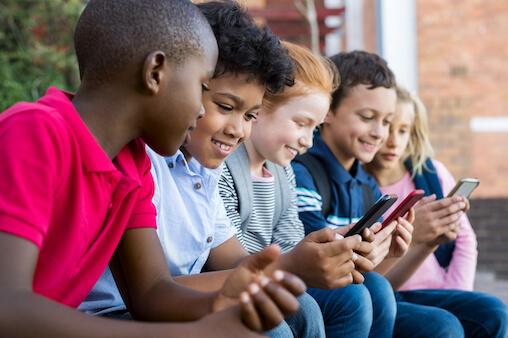 What’s the last thing a child touches before bed each night and the first thing he reaches for in the morning? For American kids between 8 and 18, there’s a good chance it’s a cell phone. But it’s not to talk. They spend 50% more time watching, playing, or listening to media on their phones than they do talking (not to mention the 1 ½ hours they spend text messaging each day by 7th grade – text messaging was not counted as “media time” in the large 2010 Kaiser Family Foundation study on media in the lives of 8- to 18- year-olds).

Today’s children spend more time every day with media than with any person or activity (except, maybe for sleep). They average more than 7 ½ hours a day – but unlike the traditional fulltime work week, they average 7 ½ hours a day, 7 days a week. And because of multitasking, they manage to pack in an average of 10 hours and 45 minutes of media consumption each day – shattering the amount of kids’ media exposure just 5 years ago. TV content, music, video games, and computer use are each up dramatically since 2004; meanwhile, time spent reading print material has dropped modestly, not enough to be statistically significant.

Children in the study were divided into three groups: heavy users (who consume >16 hours of media per day), medium users (3-16 hours of media per day), and light users (<3 hours a day). Nearly half of heavy media users got mostly fair or poor grades (mostly C’s or below), compared to only 23% of light media users. Heavy users were also more than twice as likely to get into trouble a lot, and were significantly more likely to often be bored, sad, or unhappy. It’s not clear from the study what was the cause and what was the effect, but I suspect it goes both ways – at least.

The researchers found three strong associations with decreased media exposure that are worth noting:

1.      About 7 out of 10 children in the study had a television in their bedrooms. Not having a TV in the bedroom had an average of 4 hours less media exposure of all types per day.

2.      Almost half of the households report leaving the TV on most of the time, even if no one is watching. Those who don’t average 3 hours less total media exposure of all types per day.

3.      Kids whose parents have any media rules at all average almost 3 hours less media exposure per day.

Media has become a massive part of children’s lives, more so in the last 5 years than ever before in history. They are exposed to more hours of media than to you or to their teachers – immersing them in a sea of strong and subtle messages about food, sex, violence, gender, body image, faith, parents, families, and values of all types.

Whenever kids spend so much of their childhood and their attention on anything, we owe it to them to pay attention as well — and to consider how it is affecting them, both for the better and for the worse.