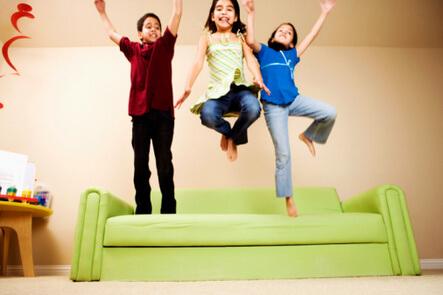 We hear about the medical condition called Attention Deficit Hyperactivity Disorder (ADD or ADHD), and wonder if our children might be hyperactive. By age 4, about 40 percent of children act in a way that makes their parents and teachers concerned about ADD (Developmental and Behavioral Pediatrics, 6, 339-348, 1985).

No one knows what causes ADHD, but many studies are looking at the roles of brain structure and brain chemicals in ADHD. There are several good, “official” definitions of ADHD, but I find the definition in the DSM-IV the most useful (Diagnostic and Statistic Manual of Mental Disorders, 4th edition). This definition differentiates symptoms into two categories: “Inattention” and “Hyperactivity-Impulsivity.” Children with a diagnosis of ADHD should meet A-E of the criteria below:

1. Six or more of the following symptoms of inattention have persisted for at least six months to a degree that is maladaptive and inconsistent with developmental level:

2. Six or more of the following symptoms of hyperactivity- impulsivity have persisted for at least six months to a degree that is maladaptive and inconsistent with developmental level:

B. Some hyperactive, impulsive, or inattentive symptoms that caused impairment were present before age 7 years.

C. Some impairment from the symptoms is present in two or more settings (such as in school or work and at home).

D. There must be clear evidence of clinically significant impairment in social, academic, or occupational functioning.

E. The symptoms do not occur exclusively during the course of a pervasive developmental disorder, schizophrenia, or another psychotic disorder and are not better accounted for by another mental disorder (such as a mood, anxiety, dissociative, or personality disorder).

There are three subtypes of ADHD. Children meet the criteria for “ADHD, Predominantly Inattentive Type” when they have met inattention criteria (section Al) for the past 6 months. They meet criteria for “ADHD, Predominantly Hyperactive-Impulsive Type” when they have met hyperactive-impulsive criteria (section A2) for the past 6 months.

When a child meets criteria for both section A1 and A2 for the past six months, he/she meets the criteria for “ADHD, Combined Type.”

Now, parents who have tried to take a 3-year-old out for a leisurely dinner in a quiet restaurant (especially with other adults whose opinions they value) can quickly learn that normal children at this age can exhibit all of these behaviors.