How People Got Pepsi to Change its Mind: A Recipe 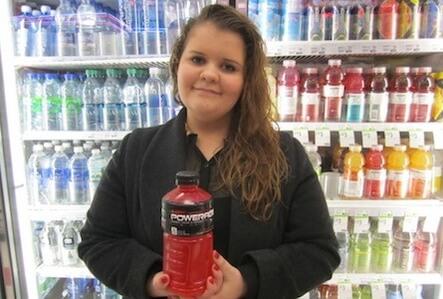 The last chapter of this story starts with one 15-year-old girl named Sarah Kavanagh, a vegetarian who had gotten into the habit of reading foods labels to be sure there weren’t any hidden animal products. In Gatorade, one of her favorite drinks, she came across an ingredient she didn’t recognize – brominated vegetable oil, or B.V.O. She decided to take on Pepsi.

She was curious enough to do a Google search and learn this is a registered flame retardant. It had already been banned in many nations where Gatorade is sold, including Japan and the European Union. Sarah reasoned that means, #1 B.V.O’s not necessary to make Gatorade, and #2 there is enough information out there that entire countries have banned this chemical product. She’s right. There are reasons to be concerned and viable alternatives available.

But brominated vegetable oil was still present in about 10 percent of drinks sold in the United States., even though advocates had been working on getting it banned in the US for years.

Sarah took action. She started a simple petition at change.org/gatorade. Word spread. Many people — over 200,000 — signed the petition. This caught the attention of the New York Times, which ran a story, and of Dr. Oz, who invited Sarah to appear on his show.

I met Sarah on the Dr. Oz set, just before her 16th birthday. We were filming a show about unwanted chemicals in our food. Two of my heroes were also on the show – Heather White, executive director at the Environmental Working Group, and Michael Jacobson, executive director of the Center for Science in the Public Interest, who had been working on this issue for decades.

Sarah said that when she tried to contact Gatorade, she had gotten no response other than a form letter. When Dr. Oz contacted them, though, their parent company PepsiCo sent an official statement. Sarah’s concern “has been heard.”

Heard indeed! In the week between when the show was taped and when it aired last Wednesday, PepsiCo announced that it would remove B.V.O from all Gatorade within the next few months.

What’s the budget recipe for changing a multi-billion dollar brand?

PepsiCo is pulling B.V.O from Gatorade – but leaving it in Mountain Dew and Diet Mountain Dew, both of which are billion-dollar products.

Next step? Sarah told us it’s time to move beyond just going product by product and take the B.V.O issue to the F.D.A. Public opinion, public conversation, and buying choices can turn up the heat both on beverage companies and on the F.D.A.