One month after eating an earthworm on a dare, a 16-year-old girl developed a fever and nausea that lasted about 2 or 3 days, along with some mild swelling around her eyes. These symptoms went away, but over the next two weeks, she also had a worsening cough and lost 5 pounds. The diagnosis? 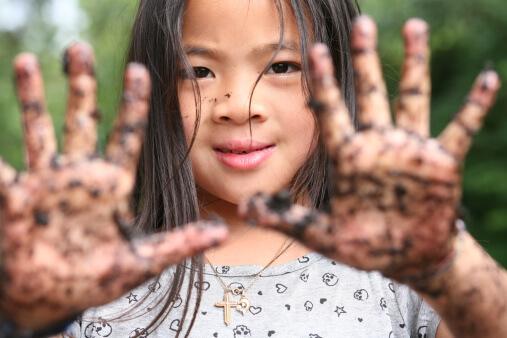 She had developed lung abscesses from parasites that were moving through her lungs. Her story is unusual because she is a teen. But the worms she was infected with are common in the U.S., usually infecting toddlers and preschool-age kids. These worms, called Toxocara species, are common roundworms of dogs and cats (especially puppies and kittens). In developed countries, infections with these worms in kids are second only to pinworms. What’s the usual story?

In the typical scenario, a young child (age 1 to 4) is happily playing in a sandbox or a playground or soil that contains tiny Toxocara eggs. These eggs may be found wherever infected dogs or cats defecate (common throughout the contiguous U.S., especially in the southeast). Then the child puts dirty fingers in the mouth, or eats some sand or dirt. Once swallowed, the eggs hatch and the larvae begin to migrate through the body, where they can invade any organ. This sounds scary and gross, but.

The good news is that most kids who are infected with Toxocara species will get better on their own, without any treatment, and without ever having any symptoms or awareness of the infection. The higher the number of eggs ingested, the higher the chance of symptoms. Fever and increased white blood cells (especially white blood cells called eosinophils) are the most common signs if any signs are present. Migration to the liver may cause liver enlargement. In some kids, though, the worms will migrate through the lungs, leading to cough or wheeze. Some kids diagnosed with bronchitis, pneumonia, or asthma actually have Toxocara infections. Usually, simple anti-parasite medicines will take care of the problem. Far less common, but far more serious, is migration to the heart, brain, or eyes.

How can Toxocara infections be prevented? Proper pick-up and disposal of pet poop at parks and playgrounds helps in public areas. Treating puppies and kittens with recommended worm medicines, especially during the first 8 weeks, helps prevent infections from your own pets. It makes sense to cover sandboxes where your child will play when they are not in use. Keep fingernails from getting too long, and clean the hands after playing in sand or dirt and before they go in the mouth. And, of course, try to avoid eating earthworms – even on a double dog dare.

Earthworms are wonderful friends to have in our soil. They aerate, detoxify, and enrich the soil as they move through it, swallowing the soil, and leaving behind marvelous, rich soil castings. But in the meantime, Toxocara larvae can be found throughout the length of the earthworms if they have been eating infected soil. Eating earthworms can make dogs, cats, or people sick.

So, contrary to the lines of the old song, even if nobody loves you, everybody hates you – don’t go eat some worms.

Last medical review on: December 22, 2021
About the Author