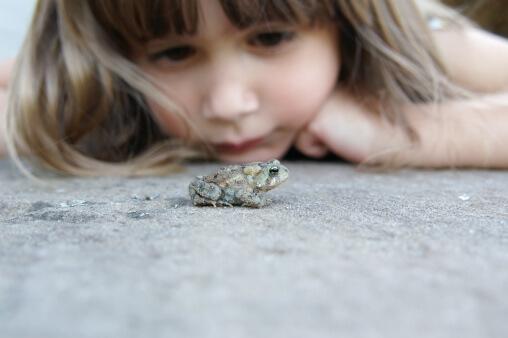 When I was in junior high school, one of my science teachers told me that if a frog is placed in water that is gradually heated, the frog wouldn’t notice the danger until it was already being harmed. I see something similar happening to our children’s nutrition today. Our world is now boiling with the advertising and marketing of unhealthy foods to our children.

We are raising the most obese generation of children in history. Nevertheless, the colorful cartoons, cute characters, clever commercials and enticing packages stuffed with harmful foods are so common, that they almost seem normal. The summer treat of fresh berries and nectarines has been replaced by chemically colored, sugar-laden, partially hydrogenated fare. Recently, the appearance of these junk foods within a trusted educational source was pointed out in a press release. The jarring juxtaposition has refreshed my ability to see how abnormal this all is wherever it appears. Frogs, kids, and parents, beware:

The National Geographic Society’s once ad-free magazine for kids is now packed with ads for fast food, candy, sugary cereals, snack cakes, and other products, according to the nonprofit Center for Science in the Public Interest (CSPI). CSPI today urged the Society to reject ads for low-nutrition, high-calorie foods which CSPI says put the magazine’s young readers at greater risk for obesity, tooth decay, and other diet-related diseases.

The magazine, National Geographic Kids (NGK), also runs very few articles about nutrition or healthy eating and shamelessly blends food advertising into its editorial content, according to a review CSPI conducted of 17 recent issues. Those issues had 51 junk-food ads, including ads for Twinkies, M&Ms, Frosted Flakes, Froot Loops, Hostess Cup Cakes, and Xtreme Jell-O Pudding Sticks. In one recent issue, the magazine printed a wrap-around cover, similar to the actual cover, promoting an Arby’s “Adventure Meal” that contains National Geographic Kids materials. Each meal is “loaded with learning,” according to the ad copy, and “trusted by moms.” One of the meals depicted is fried chicken fingers with French fries, which provides 590 calories and more than half-a-day’s worth of fat and sodium.

“At a time when obesity, diabetes, and other nutrition-related health crises plague our nation and especially our youth, it is unconscionable that the National Geographic Society, with its esteemed reputation and long standing educational mission for both adults and children, has chosen to cram National Geographic Kids with ads for sugary cereals, candy, and snack foods,” wrote CSPI executive director Michael F. Jacobson and CSPI legal consultant Ellen J. Fried to John M. Fahey, Jr., president and CEO of National Geographic. CSPI also told the Society that its food ads run afoul of the guidelines set by the Children’s Advertising Review Unit of the National Advertising Review Council—the self-regulatory body of the advertising industry.

CSPI also said that for a magazine supposedly devoted to encouraging respect for the animal kingdom, some of its ads seemed particularly inappropriate, such as ads for Hostess Cup Cakes and Twinkies that depict a duck being hit by a train and a beaver getting crushed by a fallen mailbox.

National Geographic Kids published articles about food for kids to eat in the editions CSPI examined, including one with candy and cake recipes for Halloween. Another focused on food industry efforts to make more healthful foods, but ended by belittling children’s interest in nutrition thusly: “Some McDonald’s restaurants are offering Happy Meals with fruit instead of fries. Fruit will make the meal more healthy, but will it make kids happy?”

Junk food ads are clearly a major source of revenue for the National Geographic Society. Ad rates range from $31,825 to nearly $169,000.

“National Geographic has built up its reputation over so many years, and it would be absolutely tragic for it to squander its credibility by continuing to push junk food on its youngest and most impressionable readers,” Jacobson said.