Fathers for Organic – Part 6 of 7: A Father Provides 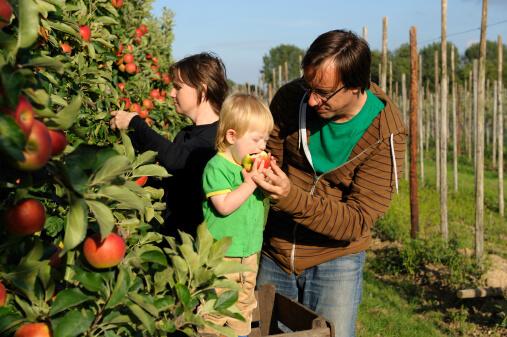 Tomatoes contain an important nutrient called lycopene. Lycopene is one of nature’s most potent antioxidants. It has proven success at preventing and healing damage done to cells within our bodies. Eating lycopene lowers cancer and heart disease risk. Tomatoes and tomato products are the major source of lycopene in the American diet. The average American eats about 90 pounds of these foods each year: about 16 pounds of fresh tomatoes (mostly in salads and sandwiches) and about 75 pounds of tomato juice, tomato paste, catsup, etc. In kids, of course, tomato products such as catsup make up an even higher percentage of tomato consumption.

USDA scientists decided to analyze catsup levels to see if catsup is an adequate source of lycopene and other antioxidants. They looked at national brands, store brands, little catsup packets, and the catsup on fast food burgers. Fast food and packet catsup had the fewest nutrients, but even so they are a pretty good source of lycopene. The scientists were surprised to learn, however, that organic catsups were, on average, 57 percent higher in lycopene. And they had double the antioxidant power of conventional catsups14.

Just switching from conventional to organic catsup could significantly increase the nutrients we give our children. Their bodies, the brains they think with, the arms they throw a ball to you with, are built from the foods they eat. They deserve the best.

In the Organic Center’s “State of Science Review” on the impact of organic production methods and food processing on antioxidant levels, organic food was found to have on average 30 percent higher levels of antioxidants compared to conventional foods grown under otherwise similar conditions15. That’s if we give organic foods instead of the conventional counterparts (e.g. organic grapes instead of chemically sprayed grapes).

When we provide our children with organic foods, though, we are often giving them an even bigger edge: organic blueberries instead of partially hydrogenated snacks, organic milk instead of high fructose sodas, organic orange juice instead of sugary drinks. What a gift! What an important part of our responsibility!