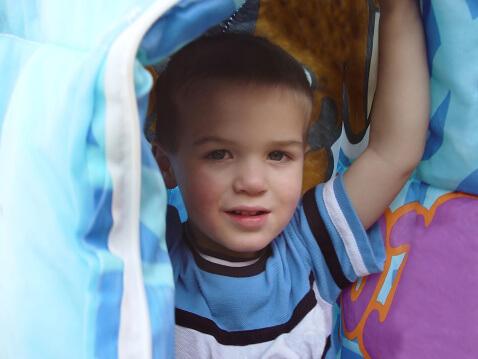 Bacterial meningitis can occur at any age, but 95 percent of cases are in children under 5 years old.

Boys are more likely to get it than girls.

Together, three types of bacteria account for over 90 percent of bacterial meningitis: H. influenza type b, meningococcus, and pneumococcus.

These bacteria are transmitted by person-to-person contact through respiratory secretions. Many people carry these bacteria with no serious consequence. (Pneumococcus, for instance, is the most common cause of ear infections.) A few people get very sick. Pneumococcus causes meningitis in about 3 per 100,000 people. (Textbook of Pediatric Infectious Disease, Saunders 1998)

Children with meningitis become increasingly irritable and/or lethargic. The presence of petechiae (purple spots that indicate internal bleeding) is a sign that the infection may be raging out of control.

Pneumococcal meningitis is a devastating disease. Of all the kinds of meningitis, it is the most likely to have a negative outcome (Pediatric Infectious Disease Journal, May 1993). The overuse of antibiotics is resulting in increasingly resistant strains of pneumococcus every month.

In 1991, a vaccine against the H. influenzae Type b (HIB) bacteria was incorporated into the routine immunization schedule beginning at 2 months of age. The amount of meningitis plummeted. Arkansas Children’s Hospital had about 27 cases of HIB meningitis per year in the 1980’s before the vaccine was used. By 1993, the number had dropped to only 1.7 per year (Southern Medical Journal, Jan 1994). During the same period the number of cases dropped by 95 percent in the United States as a whole (Textbook of Pediatric Infectious Diseases, Saunders 1998).

The new pneumococcal vaccine for infants is now FDA approved and recommended by the American Academy of Pediatrics for all children less than 2 years of age. Vaccination of children between 2 and 5 years of age may also be considered on an individual basis. In large clinical studies, the vaccine has been shown to decrease the risk of invasive pneumococcal infection (i.e. meningitis and blood infections) by more than 93%. It has also been shown to decrease the risk of pneumonia and otitis media (ear infections). More information about the vaccine can be found at www.cdc.gov/.