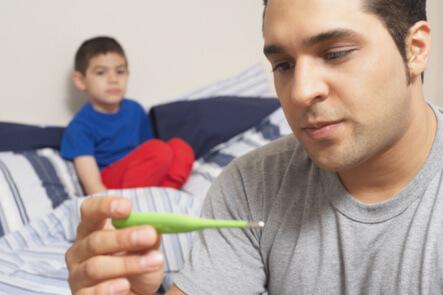 Most bacteria and viruses that cause infections in humans thrive best at 98.6 degrees F (37C). Raising the temperature a few degrees can give the body the winning edge. In addition, a fever activates the body’s immune system, accelerating the production of white blood cells, antibodies, and many other infection-fighting agents.

Brain damage from a fever will not occur unless the fever is over 107.6 degrees F (42C) for an extended period of time.

Untreated fevers caused by infection will seldom go over 105 degrees unless the child is overdressed or trapped in a hot place. In a neurologically normal child, the brain’s thermostat will stop the fever from climbing above 106 degrees F.

While 98.6 degrees F is considered the normal core body temperature, this value varies between individuals and throughout the day. The daily variation is minimal in children less than six months of age, about 1 degree in children 6 months to 2 years old, and gradually increases to 2 degrees per day by age six. A person’s baseline temperature is usually highest in the evening. Body temperature, especially in children, is normally raised by physical activity, strong emotion, eating, heavy clothing, elevated room temperature, and elevated humidity. Rectal temperatures below 100.4 degrees F (38C) may be entirely normal (no fever). A rectal temperature of 100.4 or above should be considered a fever. Lower values might be a fever, depending on the child.

A fever does not necessarily need to be treated. If a child is playful and comfortable, drinking plenty of fluids, and able to sleep, fever treatment is not likely to be helpful.

Steps should be taken to lower a fever if the child is uncomfortable, vomiting, dehydrated, or having difficulty sleeping. The goal is to bring the temperature between about 100 and 102 degrees F — not to eliminate the fever.

When trying to reduce a fever, first remove excess clothing or blankets. The environment should be comfortably cool (one layer of light weight clothing, and one lightweight blanket to sleep).

Two medicines are useful for reducing fevers in children: acetaminophen (Tylenol) and ibuprofen (Children’s Advil or Motrin). Acetaminophen is given every 4-6 hours, and works by turning down the brain’s thermostat. Don’t use under three months of age without first having the child examined by a physician. Ibuprofen is given every 6-8 hours, and helps fight the inflammation at the source of the fever. It is not approved for children under 6 months. Both medicines may be given for stubborn fevers, but be very careful about using the correct dose of each.

A lukewarm bath or sponge bath may help cool a febrile child (after medication is given — otherwise the temperature bounces right back up). Cold baths or alcohol rubs cool the skin, but often make the situation worse by causing shivering, which raises the core body temperature.

Fevers are a signal that something is going on in your child. Usually this is a minor illness, but it can be a serious infection, such as meningitis. Any child less than 90 days old with a fever should be examined by a physician right away, to rule out a serious infection (unless there was a DPT shot in the previous 24 hours). Children of any age who have a fever 104 degrees or more should also be seen, unless the fever comes down readily with treatment and the child is comfortable. Any child who has a fever and is very irritable, ill appearing, confused, has difficulty breathing, has a stiff neck, won’t move an arm or leg, or who has a seizure should also be seen right away.

Even without the above symptoms, children under 6 months of age with a fever should be examined by a physician within 24 hours (again unless they just had a DPT), since they may have some infection that needs to be treated. Older children with a fever (6 to 24 months old) who are acting well and have no other symptoms should be seen if the fever lasts >48 hours (or >72 hours if they do have minor cold or flu symptoms).

Dr. Greene is a practicing physician, author, national and international TEDx speaker, and global health advocate. He is a graduate of Princeton University and University of California San Francisco.
Get Dr. Greene's Wellness RecommendationsSignup now to get Dr. Greene's healing philosophy, insight into medical trends, parenting tips, seasonal highlights, and health news delivered to your inbox every month.
Showing
20
comments (31 total)
Harish on May 31, 2017

My husband I both had high fever incidents (104 to 106 degrees) around age 5 or 6 that required trips to emergency room. Now in our 40’s, being like two peas in a pod similar in temperament, very low energy level, and both of us still having teenage-like acne … we wonder if there were some disruption of body regulation linked to long term damage? Can’t seem to find any studies or documentation about long term effects other than brain damage.

My daughter 4.5 year age she gotfever102 deger so what I should do last week she had fever for 3 day pls give adivce

Hi my 18 month old daughter has a fever which is not dropping at all.she is not eating or dinking anythng what should i do

My daughter got a fever but I don’t know how she got it.

My daughter is 4 snd she bumpedvheads with another kid at school in play time shes been f s int ever since and sleepy now shes had a fever of a 105.5 now for 2days now. What should i do?

This is happening from last two days. Fever is striking back within the time spam of every 4 to 5 hours. As soon as i am having medicine the temperature is reduced but then after 4 to 5 hours it is back. Also from last night i noticed that it is leaving behind a minor headache. Kindly suggest me a way out. I am a 25 year old guy.

Hi my son is 5 yrs old and has had a fever for 3 days now. It goes up and down throuthout the day, today was his highest of 102.8. Ive tried everything, from tylonal and moltrin, tea with honey and lemon, luke warm baths, hes drinking gatorade and water but hasnt been himself. Hes sleeping a lot, tried taking him to the dr today but they told me the dr’s shift was almost over so to make an appointment and come back tomorrow. Any advice as to what i could do to help him feel better and lower his temp until his appointment tomorrow? Thank you in advance!

Hi my son is 15 months old he has had a fever since last night although he has been awake 9 hours and usually asleep 5 hours ago he’s tired and lethargic but will not sleep ?

What can we do? Seems playful but the fever has been playing for more that 2 days – up to 39.4

Hi sir
I am from India .my daughter is 9n half years old .she is suffering from fever from last 23 days. We check blood urin everything blood normal slightly urine infection is there
Sir plus tell me Wat to do

Add your message here some months ago i have a problam plz ans me must ..i hv headch nd hv high fever i faint for few hour like 6 to 7..its repetd every day with me what is this

You need to see a doctor who can do a thorough examination and run tests. “Fainting for a few hours” is not normal. Do you have a way to see a doctor?

My 7 year old daughter has been having repeated fevers since January. This is her eighth time and seventeenth day of missed school since. They last about 2.5 days and then she’s totally normal. I’ve her to have her blood drawn and urine tested twice. Everything comes out fine. They keep telling me to just give her Tylenol/IB and not to worry. She always complains of being dizzy, headache and soar throat. No puffiness or any other infection symptoms.

My 7 year old daughter is dealing with this too. They diagnosed her with PFAPA and are wanting to treat each episode with Prednisone. Additionally, we talked to a Natural Doctor who is doing more intensive Lyme Disease testing. You may want to look into both of these. If you do the Lyme test, make sure it is the Western Blot. We’re also looking for ways to treat the cause with dietary changes…cutting out wheat, dairy, processed sugar. Good luck!