Their Eyes Tell the Story: Babies Fascinated By What You Say 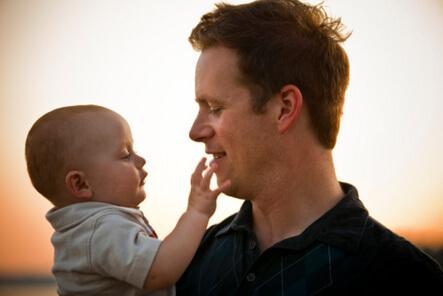 Guessing what babies and toddlers are thinking about can be difficult before they have words to tell the story. Over the first year parents usually do get increasingly adept at recognizing when their babies feel tired or hungry or have a poopy diaper. What’s the story they’re telling us? And at some point, many notice their babies staring impolitely at what the parents are eating – usually just around the time for the babies to start solids. Of course they would be fascinated by food! This is also about the time they start to stare at the mouth when you speak.

On January 17, 2012 the Proceedings of the National Academy of Sciences published an intriguing study of 120 babies from 4- to 12-months old, tracking their eye movements while their parents spoke. At four months the babies gaze at their parents’ eyes. By six months, though, a dramatic change has happened: babies are intent on lip-reading. When someone speaks, they stare at the mouth – puzzling out what this whole talking thing means and how it works. By 12 months old, babies developing normally have come to understand the mechanics and go back to watching the eyes during conversation – unless unfamiliar sounds, such as a foreign language, come up. The eyes also dilate to unfamiliar words.

I think this is one of the reasons that reading to babies is so powerful. Use the opportunity when they watch your mouth during speech to read to your baby, so they can watch the same words in the same order again and again.

And keep in mind: Babies understand far more language than most people think.