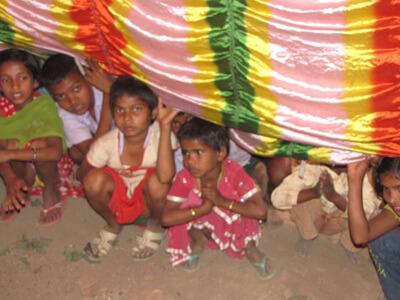 To me the name Calcutta had long carried with it the idea of incalculable poverty and destitution, of Mother Theresa’s work with the poorest of the poor. It was the epicenter of need.

But there are at least four levels of poverty below that found in a typical Kolkata (Calcutta) slum. And when we boarded a plane from Kolkata to Bihar, we were headed into poverty deeper and broader than I had ever seen.

We learned from K. P. Ramaiah, Director of Welfare and one of the top government officials in the state, that 57 percent of Bihar lives below the poverty level. That’s 40 million people below the Indian poverty level of earning $365 a year. Many or most of those not in “poverty” earn less than $1000 a year — the level where real advances in health and quality of life are made. Not surprisiny, Infant mortality in Bihar is very high.

Our flight into Bihar arrived 2 1/2 hours late, a minor detail that will become significant in this story.

After landing we drove to Sayedpur, a destitute slum where the adults were day laborers, perhaps construction or farm work, whenever they could get it. On a good day, they may earn a dollar. It was like a community of migrant farmworkers, except stuck in one place, and far, far poorer. There is a local school, but the children can earn as much or more than their parents as day laborers, so they are forced into child labor, perpetuating the cycle of poverty.

Many children only eat once or twice a day. All they get, meal after meal, is rice and dhal, a bland lentil stew. No fruits, no vegetables, no goat meat. Many children get even less. Recently, near a Bridge of Hope project, 17 children died of starvation on the same day. The work of Bridge of Hope and Vitamin Angels’ is so important.

More than 3,000 people arrived hours early for our gathering, each touching six other people as they sat jammed together in a small outdoor courtyard, The day was scorching hot. A cloud of flies and mosquitoes buzzed, settling on the crowd. Remember, we arrived 2 1/2 hours late.

K. P. Ramaiah, accompanied by armed body guards, announced to our team, in English, without being translated, an exciting program to provide financial support to parents for each day their child attended school.

A fight broke out in the crowd. Armed soldiers rushed in to try to break it up, but as one the crowd rose to its feet. My mind flashed to a CNN tweet I had just seen announcing that 67 people had been trampled to death in a stampede at a North Indian temple. My back was against a brick wall. There was no escape.

Would the crowd turn into a mob?

Howard Schiffer took the microphone and told the crowd, “I know you’ve been waiting a long time. I’m sorry. We’re here because we want the same things that you want: for our children to be healthy and happy and to live fulfilling lives.”

The crowd became a community.

We spent wonderful hours together, distributing vitamins, awarding trophies to the best students, treating parasites, teaching parents, examining kids, presenting a sewing machine to the community. For the first time in my life, I hugged a leper.

To me, one of the biggest lessons of this visit was that empathy, well-articulated, has real power to connect, even when the situation looks bleak. Empathy is the epicenter of community.

Read more in this series:
We Know the Secret
Greetings From Chenga, India
They Say an Elephant Never Forgets
Eating What The Host Serves
The Road to Jaigoan
One Cup of Tea
The Epicenter