Does what I eat during pregnancy change my baby’s food preferences?

A mother's diet changes what babies will learn to love later in life. But just how does her diet change food preferences? 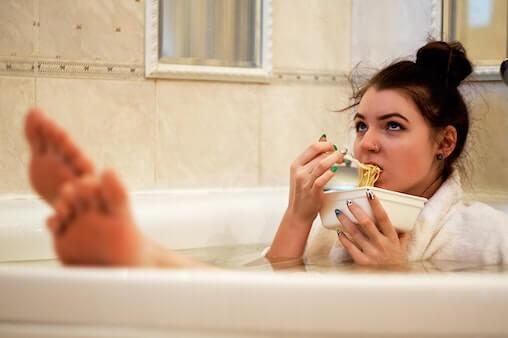 What Is There for the Baby to Smell?

The amniotic fluid is like a living bowl of salty soup. The cells in the baby’s nose can detect the ingredients in that soup and send messages about them to the brain. The composition of the amniotic fluid varies from woman to woman and from time to time, partly depending on what she eats.

Smell is an important component of flavor. I remember the elementary school science experiment where I held my nose, closed my eyes, and tasted slices of apple and raw potato. Without smell, I couldn’t tell the difference between the two.

Does What the Baby Smells in the Womb Change a Baby’s Food Preferences?

Soon after babies are born, they are able to use smell alone to pick out their mother’s nursing pads from those of other mothers. Perhaps one way they prepare to do this is by becoming familiar with the unique smell of their amniotic fluid before birth. After birth, babies clearly select and prefer the smell of their amniotic fluid from that of others.

We don’t know everything that goes into creating the individually unique aroma of amniotic fluid, but one ingredient is Mom’s diet. This was first discovered when garlic was smelled in the fluid of women who had eaten garlic.

Careful studies have since suggested that the flavors and smells of amniotic fluid teach babies much about the foods and aromas of their local culture–what they should trust and what they should not. Preferences for ethnic cuisine appear to be present by birth.

Dr. Julie Minella carried this a step further with a fascinating study involving carrot juice. As part of the study, one group of pregnant women drank 10 ounces of carrot juice four times a week for three consecutive weeks. Another group of women in the study drank water. Months later, after the babies had been born and had grown enough to have been eating cereal for four weeks, it was time to look for a difference between the groups. An observer who did not know which group each baby belonged to studied the babies as they ate cereal mixed with carrot juice. There was a dramatic difference. Those who had sampled carrot juice in the amniotic fluid readily accepted and enjoyed the carrot juice in the cereal. Those who had missed this earlier experience protested and made unhappy faces when they tasted the carrot.

Parents ask me every week how to help their children learn to like vegetables and other healthy foods. During pregnancy may be the easiest time to influence the trajectory of your child’s later diet. Eat the foods now that you will want him to eat later. Avoid the junk foods that you don’t want her developing a taste for.

This is an excerpt from: From First Kicks to First Steps: Nurturing Your Babys Development from Pregnancy Through the First Year of Life, McGraw-Hill, 2004, pp. 37-38