Too much sodium is bad. Hidden sources of sodium are worse! 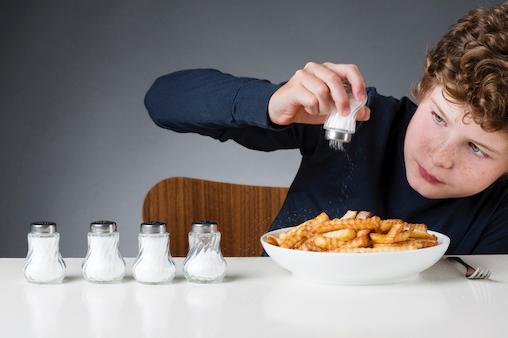 Sometimes in the hubbub of today, we miss simple things that can have a lasting impact. This is true for parents and for doctors. As part of my ongoing board certification as a pediatrician, I was thrilled recently to see an important nutrition question:

“A 5-year-old boy is brought to the physician for a health care supervision visit. The parents have no particular concerns. Which of the following interventions would be most likely to lead to a predicted decrease in mortality in a population of healthy 5-year-old children?”

Correct Answer: Decreasing sodium in healthy kids’ diets is a tangible way to set them on a course for a longer, healthier life.

Most American kids get far too much sodium in what they eat every day. It’s not from the saltshaker: it’s an ingredient used to make processed foods and restaurant foods more compelling.

The Top Sources of Sodium in Kids’ Diets

Potato chips? French fries? Fritos? Decreasing sodium is tough to do, if you don’t know where it’s found. Sodium lurks in unseen places. McDonald’s shakes can have more sodium than their fries! Surprisingly, the top sources of sodium in the American diet are, in order:

The amount of sodium in bread is low, but kids eat a whole lot of it. But a single small box of Mac and Cheese, prepared, can have 2130 mg of sodium on its own.

So what’s a busy parent with a finicky child to do?