The Dangers of Balloons 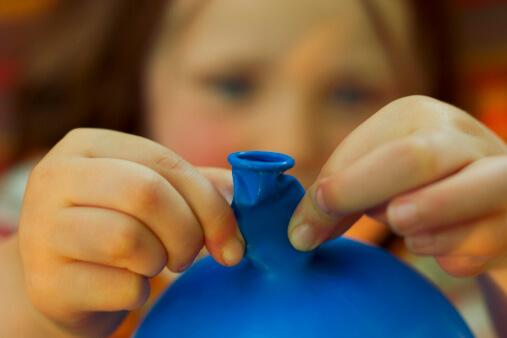 Believe it or not, balloons cause more childhood deaths than any other toy.

This shocking fact was established by a study conducted by Children’s Hospital of Pittsburgh in conjunction with DuPont Institute, and Inchcape Testing Services Risk Analysis and Management. They looked at the shape, consistency, and size of objects that caused choking deaths in 449 children. Findings from this study include: objects that pass the Small Parts Test Fixture (the cylinder with a diameter of 3.17 cm that is used to gauge the safety of small toys) can cause choking. The biggest culprits in this category are spherical objects such as balls and marbles or objects that have spherical parts such as dolls with spherical heads. Far more dangerous, however, are objects that have the ability to conform to the shape of a child’s airway, such as balloons and disposable diaper stuffing. Of additional concern is the fact that the number of deaths caused by children inhaling a portion of a balloon are still very high in the 3 – 6 year-old range, which we consider out of danger from choking.

Here are the take home lessons —