A New Clue to an Old Mystery

About 1 in 12 pregnant women develop an important combination of swelling, elevated blood pressure, and protein in the urine that we call preeclampsia. 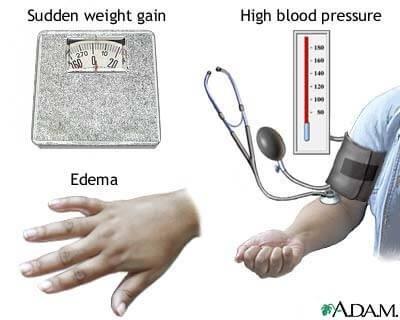 About 1 in 12 women who are pregnant develop an important combination of swelling, elevated blood pressure, and protein in the urine that we call preeclampsia. The unborn baby’s symptoms are not as easy to detect, but are at least as important. Preeclampsia is a serious health issue for both babies and mothers. Its cause (and how to prevent it) has long been a mystery. But exciting new clues will be published in the October 18, 2004 issue of the Journal of Experimental Medicine (a journal that has been uncovering secrets since 1896).

During pregnancy, mom’s blood volume increases to be able to provide for both her and her child. Normally, the placenta distributes the blood so that the mother and the baby each get enough. In preeclampsia, the placenta routes too much of the blood to the mother, resulting in the swelling, weight gain, and high blood pressure. But mom’s symptoms are late signs of the disease. Long before these signs develop, her baby is getting too little blood, resulting in decreased growth. So what causes this, and what can be done to prevent it?

What’s the problem in the placenta? It’s mom’s spiral arteries in her uterus not feeling welcomed to adequately grow into the  placenta. The spiral arteries grow in response to a dialogue between cells from the baby (called trophoblasts) and cells from the mother (NK cells). This complex, genetic communication, involving mom’s genes and baby’s genes (which come from both the mother and the father), explains some of the mysteries of preeclampsia, such as why it is much more common in the first pregnancy of a mother and her partner. The specific genes have now been worked out, and reported in this important study.

The only effective treatment for preeclampsia is delivering the baby, so it results in many premature babies. Is there any way to prevent it (other than having been pregnant with your partner before)?

Even though this is a genetic condition, there is something practical and simple you can do to tilt the odds in your favor: take brisk walks! Regular physical activity during the year before pregnancy and at least during the first half of pregnancy has been associated with both healthier babies and moms according to a study published in the June 2003 issue of Hypertension. Walking and other moderate physical activity begun during pregnancy was associated with a lower risk of preeclampsia. In this study, the risk of developing preeclampsia was further reduced if the exercise was begun before pregnancy. In the study, the pace of walking or other activity was more important than the distance covered. The best results were seen with those who walked at least 3 miles per hour. Among those who didn’t intentionally exercise, those who climbed 1 to 4 flights of stairs each day still had a lower risk than those who didn’t. Taking the time to exercise may seem difficult in today’s busy world. Nevertheless, our bodies and our babies will demand our time one way or the other. It is far more enjoyable to spend this time on pleasant walks now than on visits to the doctor later.