Having a Beer to Nurse 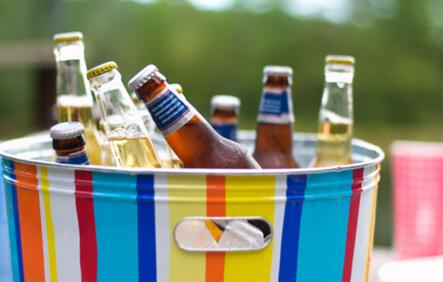 About a quarter of nursing moms today are told by one of their health professionals to have a glass of beer or wine to help them with nursing, echoing the nursing folklore that has been around for centuries. The popular wisdom suggests that the alcohol will help the mom relax, thus increasing milk production and enhancing milk let-down.

Not so! – according to a brilliant study by Julie Mennella, Yanina Pepino, and Karen Teff published in the April 2005 Journal of Clinical Endocrinology and Metabolism. When science and folklore appear to collide, they often both contain pieces of a larger truth. Putting it all together, what do we now know about alcohol and nursing? The everyday magic of milk production and let-down arise from the marvelously coordinated choreography of nursing hormones. Oxytocin and prolactin are the stars of the show. How do they perform with a drink?

In the current study, healthy nursing women arrived at a research center of the University of Pennsylvania and had an IV placed in their arms to measure blood levels. They were given 45 minutes to relax after this, in case the needle stick had affected their hormones. No babies were present, because the sight, sound, or smell of a baby can change milk production. The women were not even allowed to watch television, or talk or read about food or babies, because these things might change hormone levels. Mothers were then given either orange juice with about the same amount of alcohol as in a glass or two of wine, or plain orange juice (disguised with about half a tsp of alcohol on the surface, to trick them with flavor and smell). Electric breast pumps were used to get milk samples. On the next test day, the procedure was repeated with each mother getting the beverage she did not get the day before. The results were dramatic!

Oxytocin levels for each woman fell a striking 78 percent during the session where she had the alcohol. The women also reported feeling more tired and less happy on those days. Prolactin levels, on the other hand, surged by 336 percent during the alcohol session. The two hormones that normally move together in the nursing dance, went spinning in opposite directions after a drink. The result? Women produced less milk (volume and calories). But high prolactin levels lead to an increased sensation of breast fullness, so mothers feel like they are making more milk even though they are making less. Babies suck more vigorously at the beginning of nursing after their mother has had a drink, leading many mothers to think that babies are drinking more. Probably they are sucking harder because they are getting less. Breastfed babies drink an average of 20 percent less milk after their mother has had alcohol.

A glass of alcohol does make mom sleepier and make her breasts feel fuller. This could be the explanation for the generations of folk wisdom. Because moms couldn’t measure how much milk their babies were drinking, there was nothing to contradict this advice.

What about alcohol’s effect on the baby? The American Academy of Pediatrics suggests that light alcohol consumption is compatible with breastfeeding. The short-term risks appear to be negligible. But we don’t yet know if there are long-term effects from imprinting the baby with a fondness for alcohol. We do know that heavier alcohol use by a nursing mother (2 or more drinks a day) can have a negative impact on the baby’s development, unless the drinking is timed carefully.

If you have one glass of beer or wine after nursing, the alcohol that would go into your milk will likely have done so within 2 or 3 hours. If you pump and discard after that, your baby should not be exposed even if you have a drink.

I’ve written more about how the things a nursing mom eats or drinks affect her milk and her baby in From First Kicks to First Steps (McGraw-Hill 2004). Is chocolate okay? How about coffee? Yes! – in the right amounts and at the right times. What you eat and drink can be a wonderful experience for you and your baby to share!