Tibial Torsion: A-to-Z Guide from Diagnosis to Treatment to Prevention

The most common cause of in-toeing in toddlers is internal tibial torsion (the large bone in the calf is rotated inward). 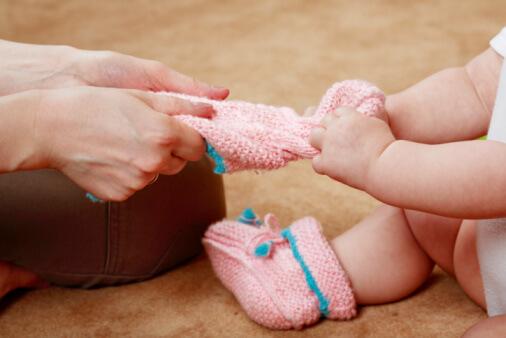 When a baby starts toddling around the home, many parents notice that one or both feet turn in.

What is tibial torsion?

The most common cause of in-toeing in toddlers is internal tibial torsion (the large bone in the calf is rotated inward). Some children are pigeon-toed for different reasons, such as a curved foot (metatarsus adductus) or a rotated hip (internal femoral torsion). Children with musculoskeletal issues, such as Cerebral Palsy, tend to have more problems with in-toeing than other children.

Who gets tibial torsion?

Generally, internal tibial torsion is a result of normal positioning of the baby in the tight space of the uterus. Some degree of tibial torsion is normal throughout infancy. This in-toeing usually corrects on its own after the baby begins to walk.

In some children, the rotation is greater than normal or lasts longer than normal. The tighter the fit in the uterus, the more likely that there will be problems. Large babies, such as those born to diabetic mothers, are at greater risk. Also, the later that a child walks or the less a child walks, the longer remodeling can take.

What are the symptoms of tibial torsion?

One or both feet turn in.

How long does tibial torsion last?

When a child begins to pull to stand, and then to walk independently, tibial torsion usually begins to correct spontaneously. In most children this process is complete within 6 to 12 months after independent walking. Spontaneous correction can continue to occur for years after this. By mid-childhood, a small percentage of children will continue to have significant tibial torsion.

How is tibial torsion diagnosed?

Tibial torsion is diagnosed (and distinguished from other causes of in-toeing) by a careful physical exam.

Tibial torsion is assessed by measuring the thigh-foot angle, if the foot is shaped normally.

While the child is relaxed and lying on his stomach, with his knee and ankle each at 90 degrees, imagine a line from the second toe to the middle of his heel. If the angle between this imaginary line and the line of his thigh, when looking from above, represents more than 10 degrees of in-toeing, he has internal tibial torsion.

How is tibial torsion treated?

For many years, the standard treatment for internal tibial torsion was the Denis-Browne splint, an 8- to 12- inch bar, worn at night, with the feet facing out at about 45 degrees. This device seemed to work quite well — almost all of the children who wore one experienced slow, steady improvement and then disappearance of their severe tibial torsion. The device worked so well that it was taken on faith. No controlled studies were done. They were felt to be unnecessary.

In 1991, a prospective, randomized, controlled study analyzed use of the Denis-Browne splint. The splint did work very well. However, doing nothing at all worked equally well! Almost all children corrected spontaneously with or without the splint.

Since 1991, many other splints have been designed to “treat” this condition, but no non-surgical treatment has been shown to be any more effective than doing nothing at all for young children with uncomplicated internal tibial torsion (Journal of the American Academy of Orthopaedic Surgeons, 11(5) 2003).

Still, old habits die hard, and it is not difficult to find textbooks and doctors who recommend the use of some type of nighttime device. My favorite of these is the recommendation that the child sleep on the back, to let gravity pull the feet outward (face-down children usually point the toes in). This recommendation is inexpensive, non-invasive, and makes some intuitive sense. As far as I know, it has yet to be studied. Some people sew bulk to the front of the pajamas to make it uncomfortable to sleep on the tummy, but I wouldn’t go to this much trouble.

If the feet still turn inward by more than 15 degrees at age five, spontaneous correction is unlikely. For these children, surgical de-rotation is an effective treatment. Typically, the best window for this is between 7 or 8 and 10 years of age.

How can tibial torsion be prevented?

Sleeping on the back, and lots of walking, running, and jumping may help prevent some tibial torsion.

While prevention of tibial torsion is not very effective, there is good news for those whose internal tibial torsion doesn’t completely correct, but isn’t severe enough to indicate surgery.

The fastest runners tend to fall in this category. Top sprinters, in particular, are significantly more likely to be in-toed than the general population.