Teething: A-to-Z Guide from Diagnosis to Treatment to Prevention

In some children, teething can cause discomfort, irritability, low-grade fevers, increased saliva and mucus, or loose stools. 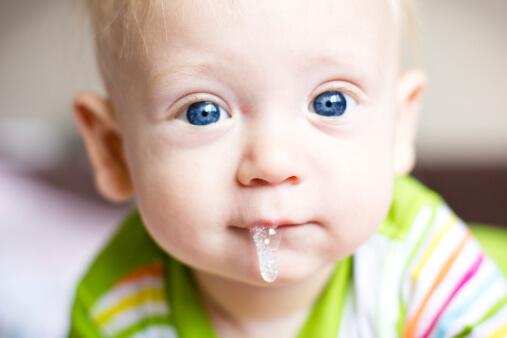 No topic has gone through wider swings in medical opinion than teething. A little more than a century ago, teething was considered the leading cause of infant death. Most of the serious symptoms of that age group (including seizures and infantile paralysis) were blamed on teething. At the turn of the 21st century, the prevailing opinion has swung in the opposite direction, maintaining that teething probably does not produce any symptoms at all — even pain, crying, or problems sleeping.
I’m glad that teething is no longer the wastebasket diagnosis it used to be, but I strongly believe that it can be an uncomfortable process for some children, and can cause low-grade fevers, increased mucus and saliva, and related symptoms. Many parents know that this is true from observing their own babies.

Teething is the process of primary teeth cutting through the gums and appearing in a baby’s mouth.

For a baby, the mouth is an exquisitely sensitive portal connecting the world around him to his developing mind and body. He uses his mouth to meet his mother, to satisfy his constant hunger, to comfort himself between feedings, and to explore objects in the widening world around him. When hard teeth begin protruding into this soft, sensitive orifice, it is a major event in the life of an infant.

When the mouth becomes a source of pain, it is quite unsettling for some kids. If you’ve ever bitten the inside of your cheek, you know how distracting a bit of newly irregular flesh can be. For a baby, the intrusion of a hard, sharp tooth through tender, swollen gums can be quite an adjustment. Some get used to it quickly, but at first, it can be more uncomfortable than a pebble in a shoe.

The teeth (or tooth) that cause the most pain vary from child to child. It is often the first tooth that causes the most discomfort — or those big molars, when they arrive. For many babies, working on several teeth at once is the worst.

Although the average time for the appearance of the first teeth is between five and seven months of age, there is a wide normal variation of timing. The teeth might come in as early as one month of age, or they might wait until a child is almost one-and-a-half-years old. Anywhere in this range can be normal. (If no teeth have appeared by one year of age, you may want to visit the dentist to be sure that everything is growing fine).

Generally, lower teeth come in before upper teeth, and generally, girls’ teeth erupt earlier than those of boys (much like with everything else). Delayed eruption of all teeth may be the result of a nutritional problem, such as rickets, or a systemic condition, such as hypopituitarism or hypothyroidism.

Children sometimes have all of the symptoms of teething again when the first permanent molars come in around age 6 or 7.

What are the symptoms of teething?

In some children, teething can cause discomfort, irritability, low-grade fevers, increased saliva and mucus, or loose stools. Parents may notice their babies drooling and bringing their hands to their mouths.

How long does teething last?

Teething usually starts about 2 months before the first tooth erupts, and proceeds intermittently. All of the primary teeth are usually in by 20 to 30 months, but most children do not have major symptoms with each tooth.

How is teething diagnosed?

Teething is diagnosed by observation. High fevers or significant irritability should not be attributed to teething and other causes should be sought. Also, the pain from ear infections is often mistakenly identified as teething pain.

How is teething treated?

When they are teething, babies bring their hands to their mouths because pressure on the gums brings relief. Massage tends to be more soothing when it comes from someone else, and teething is no exception. A great way to comfort a teething baby is to rub the gums firmly and gently with a clean finger. The first few passes are sometimes a bit uncomfortable, but babies get increasingly relaxed as the massage continues.

Providing cool things to chew on is another effective way to treat teething. Wet washcloths or terrycloth toys fresh from the fridge or freezer have been the most popular with babies and toddlers in my practice. Some are delighted with smooth, hard objects, like the handle of a hairbrush. I’ve not met many babies, though, who prefer soft plastic teething rings. Whatever you select, be careful that the object is not something your child might choke on.

When she’s still uncomfortable, she might benefit from homeopathic teething tablets. Many parents report that these gentle remedies have been lifesavers. Infant acetaminophen or ibuprofen can provide stronger pain relief on occasion, if necessary. All of these can also help with sleep.

Warning: Benzocaine and viscous lidocaine teething gels are not recommended. They may reduce pain, but they can have serious health consequences including, rarely, death.

How can teething be prevented?

The gentler remedies described above, such as massage and giving cool things to chew on, may prevent some of the soreness sometimes associated with teething.