Slate grey patches are present at birth, and most of them fade (at least somewhat) by age two. But they can be mistaken for something sinister, causing parents and children untold pain. 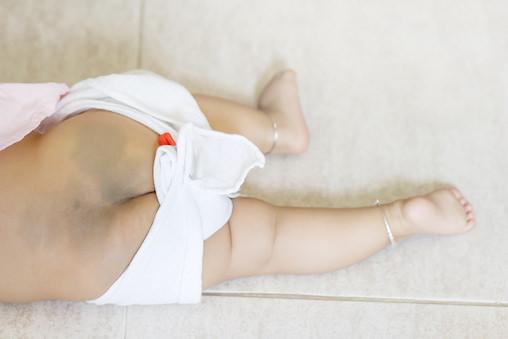 Several years ago, I met a little girl who had been taken from her parents because authorities noticed that her body, especially her buttocks, was covered with large, deep bruises. She and her parents were ripped from one another for her own good. I can only imagine what they each felt.

Child abuse charges were dropped when these “bruises” were correctly diagnosed as slate grey patches.

What are slate grey patches?

Slate grey patches (also known as “Mongolian Spots”) are nothing more than dense collections of melanocytes, the skin cells which contain melanin, the normal pigment of the skin. When the melanocytes are close to the surface, they look deep brown. The deeper they are in the skin, the more bluish they look. Either way, they are not related to bruises. They do not predispose to skin cancer or any other problem.

At least one of these spots is present on the great majority of babies of Native American, African, Asian, or Hispanic descent. They are also present in about one in ten fair-skinned infants.

Despite the name, slate grey patches have no known anthropologic significance, except for being more common in darker-skinned infants.

These flat birthmarks can be deep brown, slate gray, or blue-black in color. They do sometimes look like bruises. The edges are often, but not always, indistinct. They are most common on the lower back and buttocks, but are often found on the legs, back, sides, and shoulders. They vary from the size of a pinhead to six inches or more across. A child may have one or several.

Slate grey patches are present at birth, and most of them fade (at least somewhat) by age two. Most have completely disappeared by age five. If Slate grey patches remain at puberty, they are likely to be permanent. Fewer than five percent of children with Slate grey patches still have any by the time they reach adulthood. Those who do tend to be the ones with multiple, widespread spots, or with spots in unusual locations.

These spots are usually diagnosed by their appearance.

No treatment is necessary.

No prevention is necessary.