Roseola: A-to-Z Guide from Diagnosis to Treatment to Prevention

Roseola is a mild viral illness with a fever followed by a rash. Once exposed, the incubation period is 5 to 15 days. There is no clear way to prevent it. 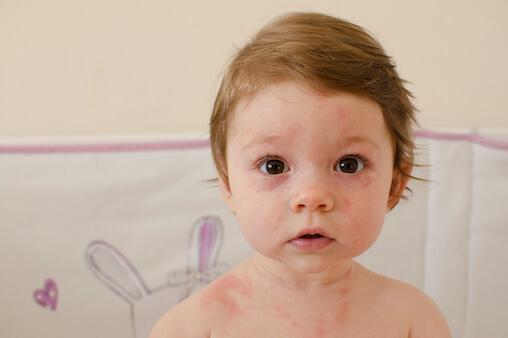 After several nights of watching their toddler with a fever, the parents notice a red rash covering his body. Is this a sign of trouble? Or is it good news?

Roseola is a mild viral illness with a fever followed by a rash. Before the 20th century, children with roseola were lumped in with those with measles or rubella or scarlet fever. It wasn’t until 1913 that this specific syndrome was recognized, distinguishing from the others as a benign, self-limited disease occurring almost exclusively in young children.
It is caused by human herpesvirus 6 (HHV-6) or occasionally by human herpesvirus 7 (HHV-7). While the disease has been recognized for almost century, HHV-6 was discovered only in 1986, and HHV-7, in 1990. Roseola is also called roseola infantum (because it occurs mostly in infants), exanthem subitum (meaning “sudden rash”), and sixth disease (because it was the sixth of the similar childhood rash infections to be described). It is one of the classic childhood exanthems.

Almost all cases of roseola occur in children before their third birthdays. The peak age is between 6 and 15 months. Healthy babies are born with protective antibodies from their mothers, but these begin to disappear when the baby is 4 to 6 months old. By 15 months, most babies have protective antibodies that they have made themselves. These will last a lifetime.

Fewer than half of children ever get roseola. Nevertheless, almost all children have had HHV-6 infections by age 3. For the majority, who never get the rash, the HHV-6 infection usually causes a fever, perhaps with other symptoms. It is a common cause of baby’s first fever. HHV-7 follows a similar pattern, but the time sequence is more spread out; most children have become infected before middle school.

Classic roseola features a high fever (average 103°F) that lasts for 3 to 5 days (worse at night). Most children behave normally, even with the high fevers. In most, the fever ends abruptly, although it can disappear slowly over a day or so. A rash appears within hours of the fever subsiding. The rash is rose-colored, as the name roseola suggests. The rash may be present on the upper arms, legs, and face, but is most prominent on the neck and trunk, where it usually begins. It consists of numerous, small (2- to 5-mm), slightly raised spots that blanch (turn white) when pressed. The rash does not itch and does not cause blisters. The rash typically lasts for 24 to 48 hours. Sometimes the spots coalesce before the rash disappears. In some children, the rash may be fleeting—gone in minutes or hours.

The most common complication is seizures at the beginning of the high fever in a small number of children. These febrile seizures are scary to parents but are benign.

Once people have been infected with HHV-6 or HHV-7, the virus typically stays in their bodies for the rest of their lives. Antibodies prevent them from getting sick again themselves, but they can infect others. Most infected adults have the viruses in their saliva. Children typical get roseola from close exposure to caregivers who are themselves well—not from being around sick children or adults. Once exposed, the incubation period is 5 to 15 days.

Roseola is usually diagnosed based on a classic history and physical exam. During the days of fever, before the rash appears, lab work may be needed to rule out other problems. Once the rash has appeared, the diagnosis is usually clear. Sometimes it is confused with rubella, measles, scarlet fever, fifth disease, or drug reactions (especially if children have been started on an antibiotic during the fever).

How is roseola treated?

Antibiotics do not help. No treatment is needed in otherwise healthy children, except perhaps for acetaminophen or ibuprofen to lower the fever or increase comfort. Antiviral agents are available for those rare children who need them.

There is no clear way to prevent roseola. There is no reason to exclude children with the roseola rash from daycare.

Last medical review on: February 04, 2022
About the Author