Nosebleeds: A-to-Z Guide from Diagnosis to Treatment to Prevention

We are built to be concerned at the sight of blood – especially the blood of our children. When we see a nosebleed, our immediate concern is about blood loss, but fears of anemia, leukemia, or hemophilia may dance in the shadows. 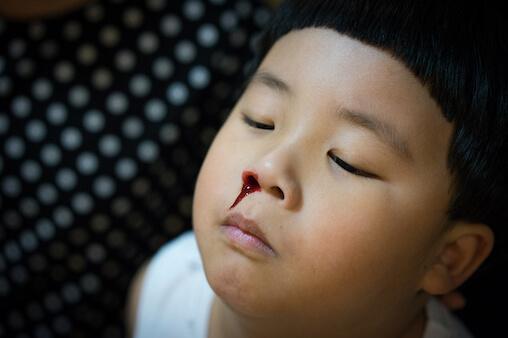 Nosebleeds: A-to-Z Guide from Diagnosis to Treatment to Prevention

Blood can flow from the nose for many reasons, most of which are not serious. Moreover, the amount of blood lost from most nosebleeds is quite minor.

The blood vessels of the nose are fragile and close to the surface. The thin mucus membrane makes these vessels very susceptible to minor trauma and to cracking and drying.

A finger (or other foreign body) in the nose is a very common cause of bleeding, even if the blood flow does not start right away. A cold or nasal allergy produces swelling and irritation in the nose that make the nose more likely to bleed spontaneously. Sneezing or blowing the nose can also trigger a bleed. Dry air or irritating fumes can cause a bleed, alone or in combination with other factors. In young children, irritation from GE reflux can trigger a bleed.

Occasionally the bleeding may be caused by a congenital problem, such as a hemangioma. A disorder of blood clotting, whether from low platelets, from hemophilia, or from medications, is an uncommon cause.

Chronic illnesses can also lead to nosebleeds, but generally, people are well aware of this illness long before the nosebleed.

Nosebleeds are more common in the winter months when the dry air can cause the lining of the nose to dry out. A dry climate can have the same effect any time of the year.

Nosebleeds are also more common among those with nasal allergies or colds.

Most nosebleeds start silently, without warning. Red blood begins to flow freely from one, or sometimes both, nostrils.

A nosebleed is usually painless. If blood flows down from the back of the nose and is swallowed, it can trigger vomiting.

A nosebleed is diagnosed by observing the blood. Frequent or severe nosebleeds may be evaluated to look for the underlying cause.

There are many home remedies suggested for nosebleeds, from ice packs to various positions for the head. Keeping the child quiet, and tilting the head forward, are good ideas, but the most important step, as with most bleeding, is to apply direct pressure. For nosebleeds, this means gently pinching the soft part of your child’s nose against the center, using a thumb and forefinger.

This pressure should be held in place for 5-10 minutes by the clock, without peeking to see if the bleeding has stopped until the time is up. If the bleeding has not yet stopped entirely, you may repeat this one time.

In most cases, the bleeding will have stopped. If not, contact your physician or have your child seen right away.

The doctor might use nose drops to constrict the blood vessels or a special dressing to stop the bleeding.

Saline nose drops or a humidifier for the home can keep the lining of the nose soft and moist.

Some find added relief by applying something like Vaseline, using a cotton swab, to the inner surfaces of the nostrils.

Decreasing nose-picking, sneezing, and nasal congestion can also prevent some nosebleeds.
If a particular vessel causes troublesome bleeding, a physician might cauterize it to prevent further bleeding.