Hand-Foot-Mouth Disease: Your A-to-Z Guide from Diagnosis to Treatment to Prevention

Hand-foot-mouth disease is a common childhood illness featuring mouth sores, fever, and a rash. It is usually caused by a virus called coxsackievirus A16. 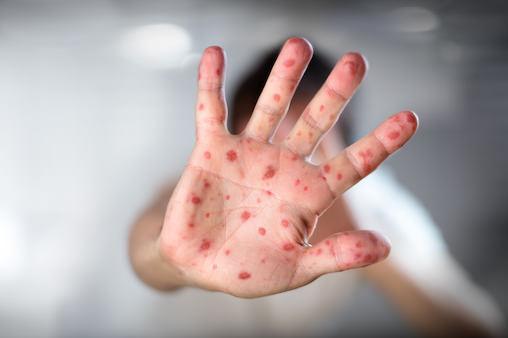 Hand-Foot-Mouth Disease: Your A-to-Z Guide from Diagnosis to Treatment to Prevention

A miserable child who has lost interest in eating solids? Perhaps the child has hand-foot-mouth disease.

What is hand-foot-mouth disease?

Who gets hand-foot-mouth disease?

This disease is most common among young children but is seen with some frequency up until puberty. Adults can get it, but this is much less common. Once people have had coxsackievirus A16 they are generally immune, but they could get another case of hand-foot-mouth disease from one of the other, less common viruses. Most infections occur in the summer or early fall, with the peak between August and October in the northern hemisphere.

Children with hand-foot-mouth disease usually start to feel crummy 3 to 7 days after they were exposed. Often, the first thing parents notice is their children’s decreased appetite for solids. Children may also have a fever and a sore throat. A day or two later, many children develop sores in the mouth. They begin as small red spots on the tongue, gums, or mucous membranes. They may blister or form ulcers.

A skin rash may also develop over a day or two, with flat or raised red spots. Unlike with many rashes, the spots are often found on the palms and soles. Also, it is common to have the rash on the buttocks. Often, the red spots will form tender blisters (although not on the buttocks). Unlike with chickenpox, the rash does not itch.

Usually, the rash disappears and the child feels better within about 1 week.

How is it disease diagnosed?

Usually, the diagnosis is made based on the history and physical exam. Lab tests are available for the coxsackieviruses and other enteroviruses, but they are not usually necessary. Hand-foot-mouth disease is sometimes confused with strep throat, which can also begin with a fever and sore throat. It is sometimes mistaken for chickenpox because they both have blisters. It might be confused with any of the childhood exanthems. Also, many children with hand-foot-mouth disease are diagnosed with ear infections because the eardrums may appear red.

Antibiotics do not help with hand-foot-mouth disease. The important issues are pain relief and plenty of fluids. Cold liquids and popsicles can be soothing for a child’s sore throat.

The viruses that cause hand-foot-mouth disease are present both in the stool and in the respiratory secretions. It can spread by fecal–oral transmission, droplet transmission, contact transmission, and by means of fomites. Hand cleansing—especially after diapering/toileting and before eating—can help reduce its spread. Children are often kept out of school or daycare for the first several days of the illness, but it is not clear this prevents others from becoming infected. Other children in the class are probably contagious even though they will never develop symptoms.