The hip is a ball and socket joint that normally allows for a wide range of motion, while holding the leg securely in the joint. In some children, the joint is too lax, leading to instability of the hips. Although this is commonly called congenital hip dislocation, the hips are rarely dislocated at birth. 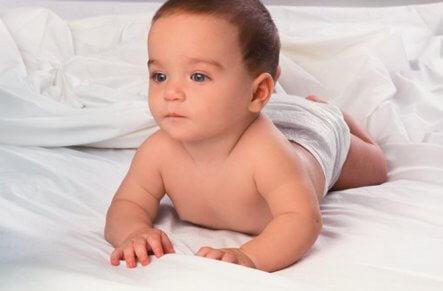 Waddling, limping, toe-walking, and unequal leg lengths in a toddler or older child may be the sign of a hip problem that went undiagnosed in infancy.

One goal of the frequent well-baby exams during the first year is to be sure that the hips are developing properly.

What is congenital hip dislocation?

The hip is a ball and socket joint that normally allows for a wide range of motion, while holding the leg securely in the joint.

In some children, the joint is too lax, leading to instability of the hips. Although this is commonly called congenital hip dislocation, the hips are rarely dislocated at birth. The hips haven’t developed completely, but the dislocation happens later on. The condition is more accurately called “dislocatable hips” or “developmental dislocation of the hips” (DDH).

Who gets congenital hip dislocation?

Anyone can be born with DDH, but it tends to run in families. It is especially common in firstborn children. Hip instability is far more common in girls than in boys. It is also more common among those who are born in the breech position.

Hip dislocation is often associated with congenital torticollis. If a baby has torticollis or turned-in feet, careful attention should be paid to the hips.

What are the symptoms of congenital hip dislocation?

In babies, parents may notice an unequal number of thigh skin folds, uneven knee position, or legs that appear to be different lengths.

Often, however, the instability is only noticed when a doctor feels “clunks” when maneuvering the hips in a particular way during well-baby exams.

Hip “clicks” may be concerning to parents, but these usually do not represent a problem by themselves. Nevertheless, if there is any concern about the stability of the hips, it would be wise to have a physician examine your child.

Unless the problem is corrected before the baby begins to bear weight, long-term hip damage can occur.

How is congenital hip dislocation diagnosed?

The diagnosis is suspected on physical exam and confirmed with imaging studies.

How is congenital hip dislocation treated?

Treatment depends on the developmental status of the hips. Treatment often involves holding the hips in the correct position so that they can continue their development. This might be accomplished with harnesses, splints, or other devices. Sometimes surgery is needed to correct the problem. In most cases, earlier identification of the problem allows for more conservative treatment options.

How can congenital hip dislocation be prevented?

Often hip instability cannot be prevented. Avoiding excess exposure to estrogens or medicines that relax the hips and avoiding breech delivery may prevent some cases.

Developmental dysplasia of the hip, DDH.