An Apple A Day? 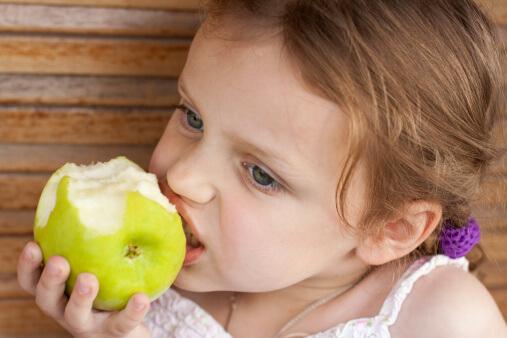 Autumn signals the return of the organic apple farmer to our local farmer’s market. Each week he offers my family crisp slices of different varieties – sometimes tart, sometimes sweet, sometimes perfect for a snack, sometimes perfect for baking. My favorites are Spitzenburgs, the same ones Thomas Jefferson is said to have loved. Today we know much more about apple nutrition than we did when Jefferson’s friend Benjamin Franklin coined the phrase, “An apple a day keeps the doctor away.”

Vitamin C wasn’t discovered until 1928. In 2003, 16 different biologic polyphenols were found in apples and especially in their skins. The analysis was published in the October 2003 Journal of Agricultural and Food Chemistry. Polyphenols have a variety of different functions in the human body, including acting as antioxidants. These newly detected polyphenols may be responsible for some of the health-promoting effects of apples recognized by Franklin more than 200 years ago. But, the apples in Franklin’s day weren’t treated with toxic or persistent pesticides.

Today, apples are on the list of the most contaminated fruits and vegetables published by the Environmental Working Group, based on analysis of over 100,000 government reports.

I’d rather kids eat any apple than modern junk food. But an organic apple a day (the way they used to be grown) is still a great way to keep the doctor away – according to both old wisdom and 21st century science.