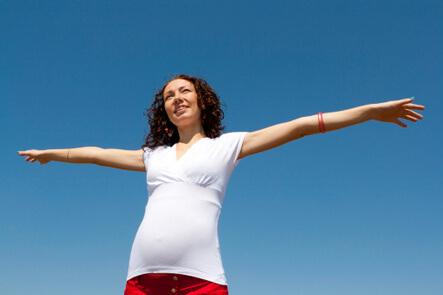 Vitamin D helps with fetal development not only through calcium and phosphate effects but also through effects on gene expression. Vitamin D affects the expression of hundreds of genes, turning some on, turning others off. Since fetal development is controlled to a large extent by genes, this is a very important role for vitamin D.

Other studies have found links between vitamin D deficiency and both preterm delivery and small birth weight. These effects are more common among black-Americans, who have lower vitamin D levels than white Americans primarily due to having darker skin. Black-Americans are also more likely to have infants with rickets.

The benefit of high vitamin D levels during lactation is that the nursing infant gets its vitamin D directly from the mother rather than having to take supplements.

Most of the findings just discussed are from observational studies. Health policy makers prefer randomized controlled trials to observational studies. One such trial was reported in 2011. The pregnant women were given as much as 4000 IU/d vitamin D3. The researchers found that it took 4000 IU/d to increase vitamin D levels to above 40 ng/ml, which was high enough to raise the active form of vitamin D to the optimal level. The active form of vitamin D activates gene expression and protects against infection. There were no adverse effects such as extra calcium in the blood or urine. They also found that those taking 4000 IU/d had significantly reduced risk of primary Cesarean section delivery and pre-eclampsia. They had too few women enrolled to find significant results for other pregnancy outcomes.

Get Dr. Greene's Pregnancy NewsletterSign up for Dr. Greene's FREE week-by-week newsletter, timed to your pregnancy to keep you up to date on every stage of your baby's development.