Anesthesia and the Developing Brain

Should you be worried that anesthesia can damage your child's brain? That is the concern raised by doctors at the Cincinnati Children's Hospital Medical. 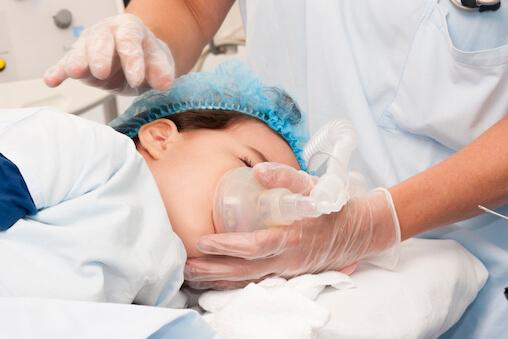 You’re already worried that your child has to undergo surgery. Now should you also be worried that the anesthesia can damage your child’s brain? That is the concern raised by doctors at the Cincinnati Children’s Hospital Medical Center who recently reported an association between intellectual performance and surgery under general anesthesia.

In their article published in the journal Pediatrics titled Cognition and Brain Structure Following Early Childhood Surgery With Anesthesia1, Dr. Andreas Loepke and others showed that children age 5 to 18 years exposed to general anesthesia as part of routine surgery developed significantly lower scores on listening comprehension and performance IQ tests. This corroborates a fear founded by several epidemiologic studies: Anesthetic exposure at an early age may be linked to learning disabilities and language abnormalities.

Apoptosis, or programmed cell death, is a normal part of brain development. Like pruning a tree, the growing brain deletes unneeded cells as part of the process of maturation. Anesthetic exposure during critical periods of brain growth seems to accelerate this process, producing premature cell death. In animals, this has resulted in diminished neuronal density, connectivity, and function, with associated behavioral abnormalities.2 Whether such changes also occur in humans is, strictly speaking, unproven, but disturbingly plausible.

Is This Anything New?

What makes the Loepke study unique is the discovery of structural brain abnormalities in children exposed to anesthesia, the first report of such a finding in normal individuals. Using magnetic resonance imaging (MRI), exposed children had subtle decreases in grey matter in the posterior parts of their brains. These regions have been linked to nonverbal IQ, mathematical abilities, and advanced reading skills.1 While the number of patients in their study was small, the results provide an important link between anesthetic exposure, structural brain changes, and impaired intellectual performance.

What is are the Implications of These Findings?

If the results of the Loepke study were borne out by additional investigations, the implications could be profound. Each year in the United States alone, an estimated six million children undergo surgical procedures that require anesthesia, including, in smaller children:

On a financial level, it has been suggested that each 1 point in IQ could be worth $18,000 in an individual’s lifetime earnings. If this were true and each child undergoing surgery developed a 5 to 6 point drop in IQ (the amount observed in the Loepke study), the total lost income could amount to a staggering $540 billion per year.1 On a societal level, the possibility that even a fraction of pediatric patients could develop impaired intellectual function from exposure to general anesthesia could create a major medical, legal, and ethical crisis.

A Word of Caution

Before concluding that anesthesia damages the pediatric brain, remember that the bulk of studies supporting such assertions, including the Loepke study, show association, not proof. The type of study that provides evidence closer to proof is the prospective, randomized trials (PRT), three of which are currently under way:  GAS3, PANDA4, and MASK.5 Although the final results are pending, preliminary results of the GAS trial show that early anesthetic exposure does not seem to cause any adverse neurodevelopmental effects, at least in children evaluated at 2 years of age.3 These reassuring results – the first published PRT on the topic of pediatric anesthetic neurotoxicity – conflict with those of Loepke, reflecting the inconsistent nature of the literature. We eagerly await the results of more definitive studies.

Until Then, Should My Child Undergo Surgery?

Until more is known, avoiding unnecessary early exposure to surgery and anesthesia seems sensible. But which surgical procedures are truly elective and how anesthetic exposure can be minimized are not easy questions for the average parent to answer. In making decisions on surgery and anesthesia for your child, do not be afraid to seek advice and better understanding from your pediatrician, pediatric surgeon, and anesthesiologist.

When it comes to your child’s brain, you have a right to know the options.

Dr. Michael Ho is a Board-Certified Anesthesiologist and former Pediatrician in Houston, Texas.  He is the Director of Anesthesiology Consultants, an educational company that helps Anesthesiologists obtain their Board Certification.
Get Dr. Greene's Wellness RecommendationsSignup now to get Dr. Greene's healing philosophy, insight into medical trends, parenting tips, seasonal highlights, and health news delivered to your inbox every month.